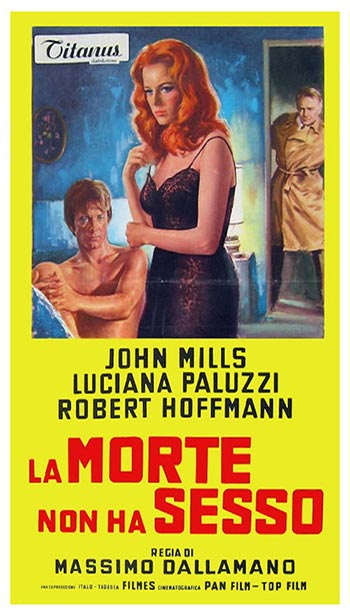 When a narcotics detective finds out that his beautiful wife–who is an ex-criminal–is cheating on him, he hires a professional hitman to bump her off. However, things don’t go quite according to plan.

A Black Veil for Lisa benefits from a trio of great central performances. John Mills gives it his all in the lead role, which sees him looking and acting the part of the jealous husband brilliantly. Mills also brings a distinct British style to the picture, which lends it a classy feel which is unlike other Giallo films. The title role is taken by former Bond girl Luciana Paluzzi, and while she isn’t given too much time to shine acting wise; she looks the part and brilliantly offsets Mills’ leading performance. Robert Hoffmann rounds off the central cast in the role of the murderer, and while he looks a bit too polished to viciously commit murder, his good looks serve him well after the first twist has been dealt out.

This Giallo is unlike others in that there is no mystery surrounding the identity of the murderer; and the focus of the movie is always on the relationship between the central characters. The order of priority regarding this is shown brilliantly by the dubious way that the identity of the killer is revealed; it’s not very realistic, but it does relate to the character – and this film is all about its characters. Overall, A Black Veil for Lisa is a great Giallo!