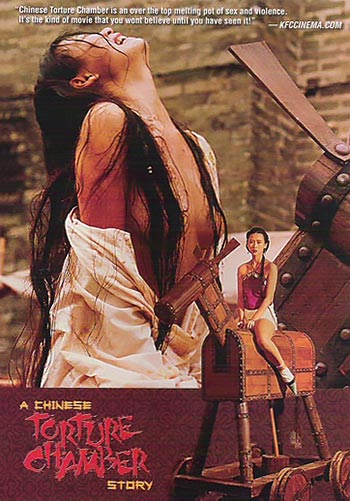 This film revolves around the plight of the oddly named Little Cabbage, a servant girl who finds herself in a heap of trouble after she takes up voyeurism. Through a series of plot twists too long to summarize here, she ends up accused of murder and facing a judge with some rather unpleasant methods for extracting confessions.

This is Hong Kong Category III cinema at its weirdest, a grotesque mixture of sex, comic sex, sexual violence, torture, and even a comedic rape scene meant to challenge the viewer’s limits. It will either have you laughing aloud or running for the bathroom with your hands over your mouth. It also has an ending that will have you pounding the table and yelling “Now THAT’S justice!”

In seriousness, the film does have a certain level of misogyny. The torture scenes involving females are shown very graphically, and there is a somewhat disconcerting theme of sexual pleasure being fine for a man while totally unacceptable for a woman. However, the film itself is so broad and over the top that it is difficult to be too offended by it.