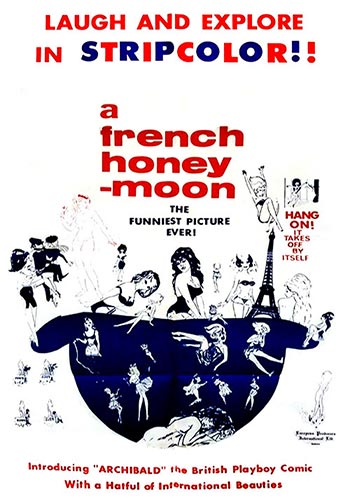 It’s called A French Honeymoon alright but it’s more like a crazy quilt of Nudie-Cutie clips and naked Glamour Girl loops, all cut and pasted into a dreamlike bit of international insanity. You know you’re in for a wild ride when, only seconds after the credits say “Directed by Gaston Hakim,” the following text appears: “The same old story written, photographed and directed by all of us. So, if there is any similarity whatsoever to our picture, it is purely coincidental and we are all to blame!!!!” Say, what ?!

The plot is Nudie-Cutie minimalist: Archibald, a British playboy, marries a French sex kitten, honeymoons in a Paris hotel room, and spends the length of the film ignoring his sleeping wife and, instead, imagines himself on a global vacation meeting, photographing, and gawking at various naked women. Simple, yes? Apparently, not simple enough as yet a second framing device is added in which, at the film’s start, a Sinister Figure sneaks into the office of a film producer – presumably that of director-producer-distributor GASTOM HAKIN (who gave the world Naked Venus, Festival Girls, and Horrors of Spider Island) – finds film cans labeled “French Honey Moon,” and unspools a reel which cues the film proper to unfold.

As his wife remains a sleeping beauty, we see Archibald rendezvous with a Russian writer named Lola L’Amour – a stylized vignette with Miss L’Amour showing off her figure in a montage of outfits. He also takes pictures of a beautiful French girl who writhes topless in the sand; takes pictures of a beautiful Spanish girl who writhes topless in the surf; gawks at a naked blonde who writhes in a hammock, a gal who blows bubbles while taking a bath, and an Italian model who writhes on a leopard-skin bed. He also heads to the jungle where a black girl with amazing red lips writhes in the heat before making out with giant blocks of ice. My goodness….

But wait! Archibald eventually saunters onto his hotel-room balcony and what does he discover right across the street? Yup, “Strip Tease College” – hey, that old Art of Burlesque film was right! – where we’re treated to a parade of fabulous looking Euro-strippers prancing around near-naked in their dressing room, and doing their striptease routines. Wonderful, wonderful…

A little bit of travelogue and a lot of Nudie-Cutie – where crisp 35mm collides head on with obvious 16mm – A French Honeymoon makes us wish we knew more about its origins. There’s far too much English on display in signs, notes, magazines, etc., for this to be a simple French import. But where, exactly, this pastiche was slapped together is, for now, anyone’s guess. And keep a lookout for that vintage Sixties’ Frankenstein toy that drops its pants and flashes its face red. For no particular reason, it’s on the producer’s desk at the beginning.