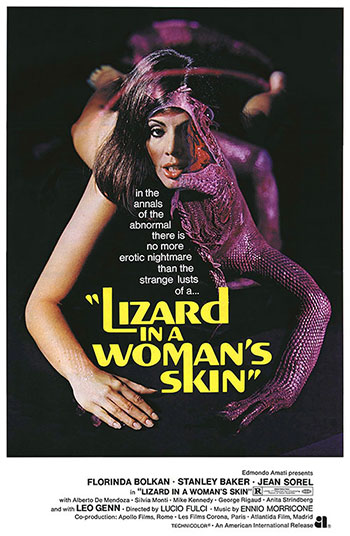 Carol Hammond, the frustrated wife of a successful London lawyer, is having bizarre, erotic dreams about her uninhibited neighbor, Julia Durer, who presides over noisy, sex and drug filled parties in the house next door. One night, Carol’s dreams culminate in violent death and she wakes to find her nightmares have become reality – Julia has been murdered and Carol is the main suspect. This frightening discovery is just the beginning of a labyrinthine psycho sexual shocker which takes the viewer on a wild ride through a series of frequently breathtaking set pieces that set new standards for the Italian thriller.

Lizard is full of red herrings and endless plot possibilities, that adds to the mystery, its trippy psychedelic dream sequences fully capture the feel of the swinging sixties,add to that some gore as only Fulci can do and you have a fine Giallo….incidentally one particular gory scene involving dogs caused controversy at the time and Fulci had to prove in court on four occasions that the effects were fake. Lizard boasts an excellent cast, that also includes Jean Sorel as Carols husband but the film is Balkan’s whose portrayal of a disturbed woman is excellent. Another Morricone score adds to the quality of the film….all in all a very interesting Giallo entry, that is very stylized and mystery driven.