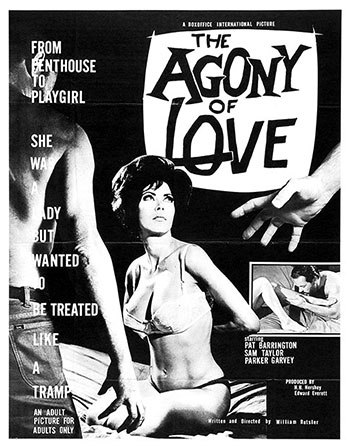 A bored housewife rents an apartment where she indulges in all of her sexual fantasies.

Made in the time when the drive-ins ruled entertainment, during the golden age of sexploitation smut, “The Agony of Love” is a real standout among many of its competitors of the era, not the least of which is due to that luscious 60’s silicone siren, Pat Barrington.

The basics of the plot are pretty much typical of what you can expect to get from a film of this kind and from this period. But while lacking in anything resembling originality, it still manages to give you the goods. Pat Barrington plays a neglected housewife, who hooks on the side, not for the money or the thrills, but to feel loved and desired. While the subject matter might have been consider almost taboo in the 60’s, by today’s standards it’s not really all that shocking. Still, this is certainly no film meant for children.

Pat’s obvious physical “talents” are one of the things that separates her from many women in this genre. More than ample, she has probably some of the the nicest body curves of the times. Unlike her physical form, though, her acting abilities are negligible, at best, since her emoting and delivery of dialog is very flat. Yet, in this film, which is one of the few times she ever got a starring role, that seems to work to her (and the film’s) benefit. Her monotoned vocal range, when she speaks, as well as the vacant look behind her eyes, is very befitting to the “damaged goods” kind of character she is playing here. Whether more by accident than design, or the director simply playing to her weaknesses and making them a strength, this is most likely the best performance of her career, bar none.

This is William Rotsler’s first time out as both writer and director of a film, as well as the first of several times he’d work with Pat Barrington over the course of the decade, but it is easily his best work. The use of some nice camera shots, puts this a step up from other like films of the era. And one scene, where Pat’s character discusses a dream with a psychiatrist, is shot with an almost psychedelic flair. It was very much in keeping with the “trippy” 60’s vibe, but gave this film something a little extra against its compatriots. Also, the twist ending is one you might not see coming. Rotsler does drag a bit on some of the sexual scenes (which showcase several kinds of fetishes), even though Pat’s form is very nice to look at, which feels more like a directorial excess than anything else, but over all it is certainly one of the best shot sexploitation films.