Anatomy of a Psycho (1961) Boris Petroff 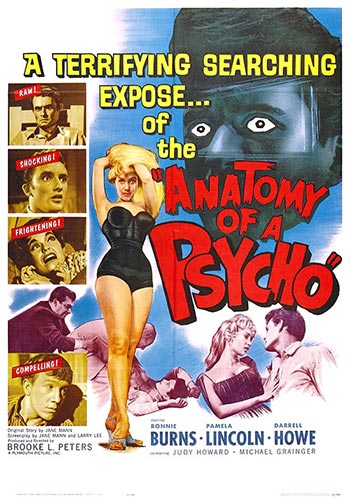 Driven to the edge of insanity by the execution of his older brother, Chet is boiling over with hatred. After getting his face slashed in a senseless alley-way brawl, his paranoia begins to paint everyone around him as an enemy. He turns to his sweet younger sister, his slutty girlfriend, and even his old poker buddies for solace, but all of them have real or imagined links back to the ill-fated trial that condemned his brother, thus aggravating Chet’s psychosis. After viciously assaulting the prosecuting attorney’s son, the troubled youth draws the relentless attention of detective Lt. Mac. Spiraling out of control, Chet commits an arson and then a senseless murder. With Lt. Mac ratcheting up the pressure, Chet sinks deeper and deeper into the bottomless pit of his own psychotic delusions.