Another Day, Another Man (1966) Doris Wishman 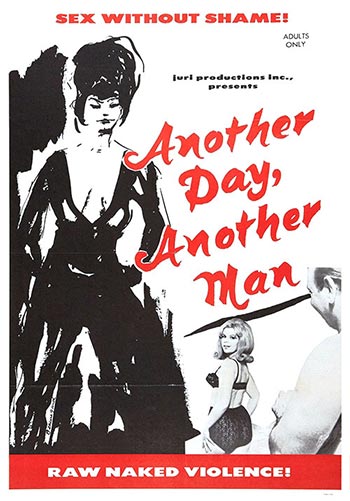 A young couple move into an expensive new apartment after the husband gets a big pay raise. Unfortunately, he is soon stricken with a mysterious ailment and becomes bedridden. The wife, unable to find a job and with bills piling up, runs into a seedy pimp who suggests a way she may be able to make a lot of money in a short time.

For the uninitiated, Doris’ films are a cataclysmic fusion of looped dialogue, maddening (non-)plotting, and irrelevant shots of shag carpeting, furniture, and actors’ feet, all punctuated with dizzying sex scenes and random acts of violence. Nobody does ’em quite like this.

In Another Day, Another Man, lady of the evening Tess tries to explain to her prudish friend Ann why being a hooker ain’t so bad after all. Naturally financial disaster forces Ann to take up hooking for Tess’ employer, Bert, just to make ends meet, and it all leads where such things must – disaster! Sex doesn’t pay, at least in Wishman’s world, but it’s so darn fun on the road to ruin that few will care about the message.

Unlike the soapy dramas being churned out by Hollywood at the time, Wishman’s roughie morality plays make no attempts at pandering to the masses like, say, Peyton Place. What we get instead is acres of sad-looking women in lingerie, trashy and all-too-catchy jazz music designed to lodge itself in your brain, and shaky camerawork that looks more accidental than cinema verite. While Doris eventually turned towards candy colored lounge nightmares like her Chesty Morgan double header, these earlier gems belong to an era unto themselves and deserve a slot, no matter how disreputable, in a history of ’60s cinema in America.