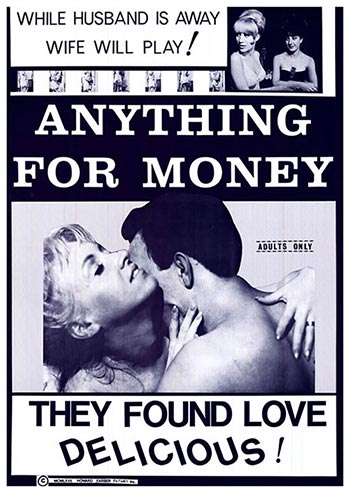 Scheming Judy and her affable husband Jack move back east and shack up temporarily with her staid Aunt Edna. Edna’s reclusive, auto-erotic roommate and business associate, Louise, takes an immediate dislike to them. Judy, busy seducing a local young delinquent who may have a past with Louise, encourages Jack to start an affair with her aunt in order to inveigle themselves into her successful business and wealth. At first reluctant, Louise loosens up after a hipster employee escorts her to the local roadhouse, where half-dressed hostesses will do “anything for money”. Her plans going well, Judy must now somehow corrupt Louise, who is wise to her tactics. The young delinquent and venal hostesses hold the key.