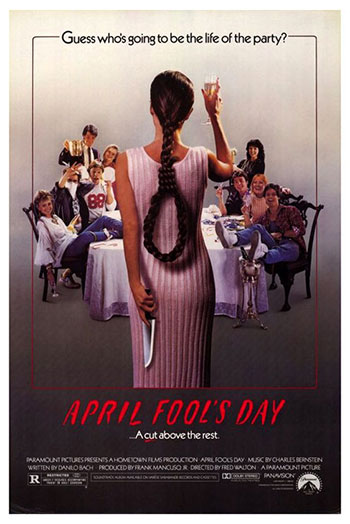 A group of eight college friends gather together at an island mansion belonging to heiress Muffy St. John to celebrate their final year of school. They soon discover that each has a hidden secret from their past which is revealed, and soon after, they turn up dead. Yet, are they really dead? Or is it just part of some very real and cruel April Fool’s jokes? The hostess, Muffy, is the only one who apparently knows what’s going on. But then again, is it really her doing the killing?

First, Walton’s production adds a bit of insanity to every scene, and gets into the characters’ heads. Walton uses everyday objects to manipulation and succeeds in the eerie scenes, such as the notorious “Well Scene” and the “Noose-snake scene”.

The characterization in the film is extraordinarily made compared to the rest of the films in the slasher-sub-genre. There are scenes that depict the aroma and the feeling of the fun and happiness of the typical, offbeat friends. The film’s teenagers are very provocative and voluptuous. The whole cast is also very good-looking and you feel sorry for their demises (mostly).

The plot is amazing and very original. However, it is very late from the slasher genre golden-age (1980-1982). April Fool’s Day is a classic amongst the slasher sub-genre and deserves a watch and a hand for it’s originality and it’s gifted, intelligent logic.