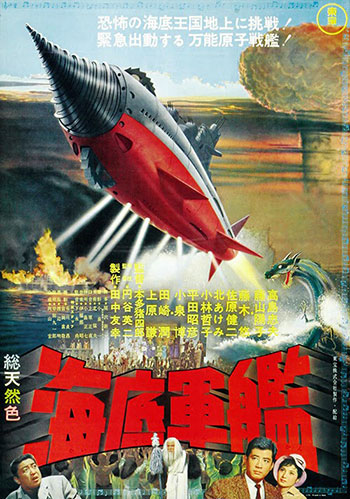 ATRAGON (1963, aka KAITEI GUNKAN) is a fun, fast paced sci-fi action thriller by the Japanese makers and stars of the Godzilla series. It seems the undersea kingdom of Mu wants to reclaim their rule on Earth. It’s up to a plucky cheesecake photographer (Tadao Takashima) and a self-exiled WW2 Japanese Naval officer (Jun Tazaki) to stop them. There are laps of logic, which kind of add to the fun, and some well staged sequences. Film gets especially silly when the undersea Mu empire sends the Japanese Government an 8mm film explaining Mu’s history and plans. This little film has optical titles, a narration, the works. Does this undersea kingdom have a film production unit complete with a film processing lab? Giddy fun here.