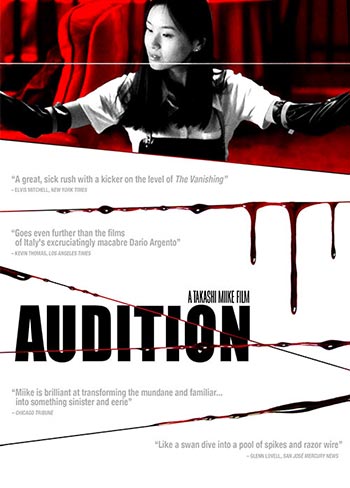 A lonely Japanese widower whose son is planning to move out of the house soon expresses his sadness to a friend and fellow film producer, who becomes inspired to hold an audition for a non-existent film so that the widower can select a new potential bride from the resulting audition pool. The widower ultimately becomes enamored with and fascinated by one particular young woman…but first impressions can often be horribly wrong…

If you want the full sledgehammer-to-the-stomach effect of Audition, stop reading this review now. Just watch it and take the consequences. At first glance, Takashi Miike’s jack in the box of a movie works like a romantic comedy: amiable widower Shigeharu Aoyama (Ryo Ishibashi) decides it’s time to find a new wife, and a friend suggests holding a fake audition to find the right girl. It soon becomes clear that there is something wrong with Aoyama’s choice. This is no ordinary Fatal Attraction-style thriller, however; Audition slowly and carefully builds into a wrenching exploration of both deep male fears and the stereotype of the cute, submissive Japanese woman. Audition is by no means an easy movie to watch–even hardcore horror fans may have trouble–but it will stay with you for a long, long time.