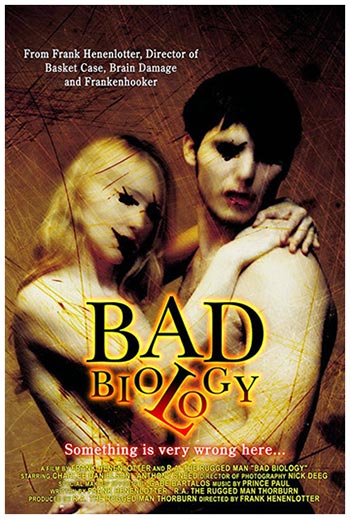 Driven by biological excess, a young man and woman search for sexual fulfillment, unaware of each other’s existence. Unfortunately, they eventually meet, and the bonding of these two very unusual human beings ends in an explosive and ultimately over-the-top sexual experience, resulting in a truly god awful love story…

Frank Henenlotter the writer/director who brought us Basket Case, Brain Damage and Frankenhooker makes a much anticipated comeback with ‘Bad Biology’ and doesn’t disappoint one bit. The very first line of the movie is “I was born with seven clits” and it just gets more and more messed up as the movie progresses. His lowest budget movie with terrible actors and appalling special effects but none of that matters in the slightest.

It’s about sex addiction and the unlikely meeting of a woman with seven clits and a man with a monstrous penis with a mind of it’s own. One could view it as dealing with sex addiction issues and an allegory of sex predators but most likely you’ll just find it silly fun. It’s a movie guaranteed to polarize it’s audience. You’ll either consider it sick, disgusting, tasteless trash that’s a whole world of wrong, or, if you have a particularly perverse sense of humour, revel in the sick mind of Frank Henenlotter in this glorious return to form.