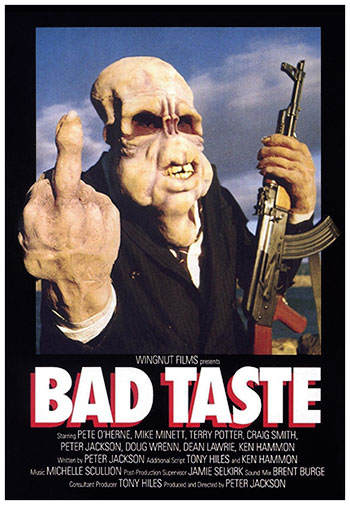 Derek and his friends must investigate the missing people in a small village. Then they find out its human formed aliens that are really big headed monsters that used all the people in the small village into their snack burgers. Now, Derek must save the day and the world with his chainsaw before the meat eaters strikes the whole planet. Will Derek kill all the aliens?

BAD TASTE, the worldwide cult hero Peter Jackson’s first picture, concerns four bumbling government agents whose job it is to rid scenic New Zealand of any alien scum that may be invading their otherwise peaceful country. After being called upon to explore an entire town that has been mysteriously deserted, the men fall upon a shocking discovery: aliens from outer space have abducted much of the human race and are planning on using their flesh for intergalactic hamburger meat! It seems humanoids are the newest taste sensation all throughout the galaxy. Now, our heroes, with the aid of the city’s one surviving human, are on a mission to save Earth from these extraterrestrials’ fiendish plot–in the bloodiest, slapstick-iest, most outlandish ways imaginable.

BAD TASTE took four years, a shoestring budget, and a tiny devoted cast and crew to complete. Shooting took place mainly on weekends, while the amateurs tended to their daily lives the rest of the week. The unmitigated commitment the crew had towards the production of the film really shows, as they all must’ve given their utmost towards not just getting the movie complete, but making it look spectacular. Jackson’s camera-work and special effects are nothing short of mind-blowing, and the fast-paced editing really gives this 16mm wonder a big-budget, professional look while still maintaining a goofy, campy feel.

Sure, the acting may be a bit over-the-top, and the meandering script does seem largely improvised, but these “shortcomings” only add to the picture’s fun, crazy atmosphere, helping to make it even funnier. The soundtrack is oftentimes a little overbearing and awkward as well, but again, it doesn’t in any way detract from the overall enjoyment of the film. All in all, if you’re a fan of gore movies, alien romps, or just good ol’ fashioned black comedy, then you don’t want to miss BAD TASTE. Just make sure you have the stomach for it, or it might just get torn out and eaten!