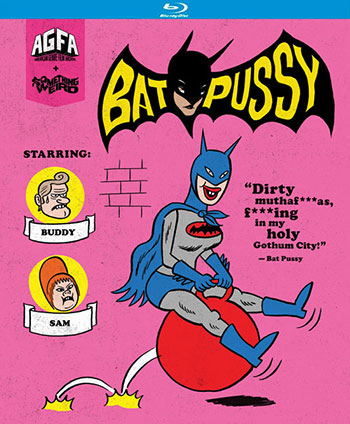 Audio 2: Commentary with Something Weird’s
Lisa Petrucci and Tim Lewis, and the AGFA team

Bat Pussy sits around her secret hideout waiting for her super-senses to tell her when a crime is about to be committed. Her twat begins to twitch, and she jumps up. Clad in green tights, a ratty cape, a tee shirt with the famous Batman insignia on it and gym shorts, the masked avenger hits the open road on her Hoppity Hop. Jesus Christ!

It is without a doubt the worst porn film ever made. Somewhere John waters is green with envy that these would-be stars slipped through his fingers. In fact, if ever radical Christian conservatives want to truly turn teenagers off to sex, this is the film they should show them. At first, you’ll be horrified to be witnessing this naked hillbilly, trash, couple pawing each other drunkenly. The overweight, beehive-wearing, leading lady twangs and drawls her way through a tirade of improvised insults and personal attacks with her drunken male costar until you almost forget entirely that this couple are attempting to make a sex flick. This film is so bad it is awesome. Sure to be like nothing you’ve ever seen before.