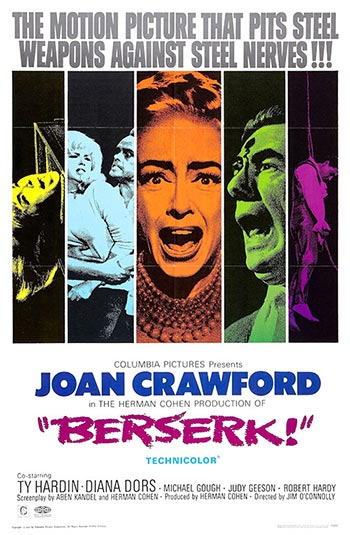 As the co-owner and ringmaster of a traveling circus, Monica Rivers (Joan Crawford) is always preoccupied with filling seats. Following the accidental death of a tightrope walker, Rivers is pleased to see her profits increase and callously unconcerned with the demise of her employee — in fact, she soon hires handsome Frank Hawkins (Ty Hardin) to replace him. But when several more performers meet gruesome deaths, it becomes apparent they are no accidents, and there’s a killer on the loose.

“Berserk!” is a classic slice of rich, frosted, sugary cake… it is wonderful, enjoyable trash, impossible to deny. First off, any movie that includes an exclamation point in the title is too obnoxious to miss. Secondly, this was Joan Crawford at her campy best… having long since turned to the Dark Side she lovably chews the scenery and fearlessly juggles midgets, murders & tightrope walkers with melodramatic grace.