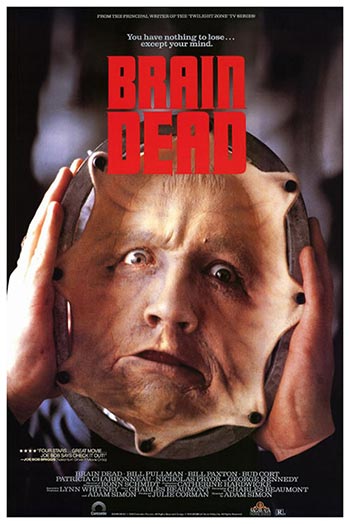 The Eunice Corporation is on the ground floor of an exciting growth industry, utilizing a memory resculpting technique bioneered by eccentric neurosurgeon Rex Martin. It envisions nationwide clinics where anyone can lose their hang-ups of an unhappy childhood, a failed romance, or a botched career. At Eunice’s “New You” outlets, a simple operation will give customers peace of mind. Or it might leave them brain dead. But when Martin refuses to cooperate, he soon finds himself plunged into a surreal existence that intertwines dreams and reality. Has Martin slipped over the edge into madness? Or have corporate profit mongers given him a push, making him the guinea pig in his own experiment? To know the answer is to know the terror!

The claustrophobia of not knowing reality from imagined reality is very real in this film. Earlier acts by Bill Pullman, and Bill Paxton make for a real viewing pleasure. But the real star of the film is Bud Cort (Harold, from the film Harold and Maude). Set designs and lighting make for a fine surreal experience. This movie is a great one with a fine story, fine actors, fine cinematography, special-fx and direction. The music sounds like synths left over from the 80’s. But that adds to the B-effect of the film. Highly recommended.