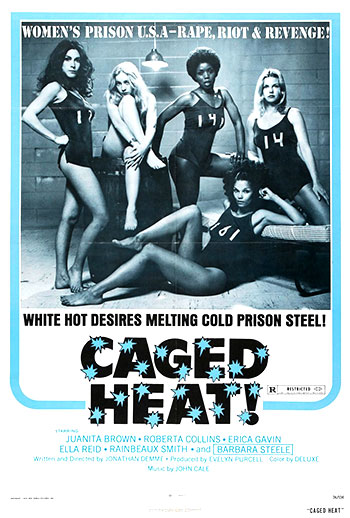 A girl is caught in a drug bust and sent to the hoosegow. The iron-handed superintendent takes exception to a skit performed by the girls and takes punitive steps, aided by the sadistic doctor who is doing illegal electroshock experiments and raping drugged prisoners. After a while the prisoners put away their petty differences and plan the Big Prison Escape.

Unbelievable that a director like Jonathan Demme, responsible for clean and sober Hollywood stuff à la “Silence of the Lambs” or “Philadelphia”, started his career in the sleazy world of the B-movies..! But next to his colleagues Brian de Palma and Martin Scorcese producer legend Roger Corman gave him the right kickstart! The film itself has all ingredients a good B-movie´s got to have, because “Caged Heat” is dirty, suspense-packed and happily far beyond the political correctness of Demme´s later films! Nudity, soft sex, violence… there´s nothing left out a decent exploitation movie should contain! Two appearances are absolutely shiny: the one comes from Erica Gavin, the unforgotten boob queen in Russ Meyer´s hilarious sleaze classic “Supervixen”! However, the even greater performance is given by the grand dame of horrors, Barbara Steele! Her part as a paralysed and prudish prison director is the main attraction in this rough WIP-flick! Director Jonathan Demme should have made more films like “Caged Heat”!