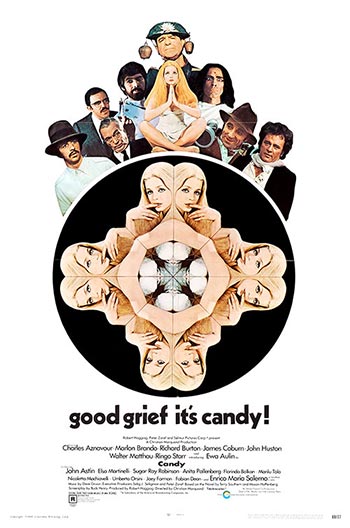 Governed by a mysterious and utterly delicious fate, the innocent high-school student, Candy, summons up the courage to embark on a life-changing journey of enlightenment, eager to discover the elusive meaning of life in the four corners of the world. Little by little, the open-minded girl unlocks the secrets of the world, as a seemingly endless parade of unusual characters–including an eccentric drunkard poet; a Mexican gardener; a chaste U.S. Army general; an overzealous surgeon from hell; a filmmaker, and a smug, all-knowing wandering guru–are more than willing to lend a hand. Will Candy’s scandalous journey of sexual awakening bear fruit? Is there a pot of gold at the end of the rainbow?