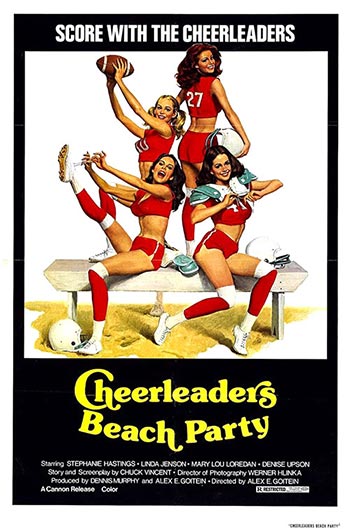 Four sassy cheerleaders do their best to prevent the star players on their football team from being recruited by a rival college. That’s it for the admittedly flimsy story, but fortunately director Alex E. Goitein keeps the pace moving along at a snappy enough clip and maintains an amiable carefree tone throughout.

In fact, it’s the way this movie astutely evokes a certain distinctly 70’s easy’n’breezy vibe that it turn gives it an oddly infectious dippy charm. Chuck Vincent’s blithely silly’n’sophomoric script offers loads of hopelessly dumb and dated jokes about such things as Billy Carter, pot brownies, O.J. Simpson, and even pubic lice (don’t ask) that are never exactly laugh out loud funny, yet still elicit a smile or two due to the affably inane context they are presented in (the unintentionally gut-busting low point definitely occurs when several folks participate in a hysterically lame group sing along of “House of the Rising Sun”).