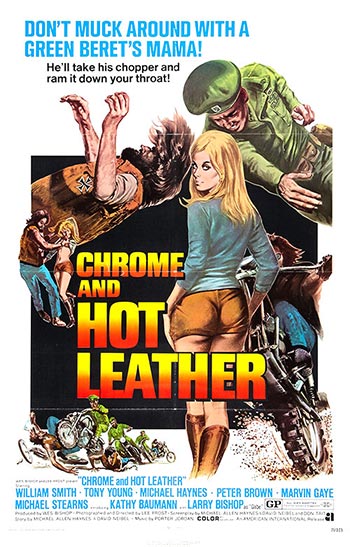 A Green Beret returns home from the Vietnam war to find that a gang of murderous bikers has killed his fiancee. He calls on several of his Green Beret buddies to come and help him take revenge on the gang.

As biker movies go, Chrome And Hot Leather is unusual. Biker films, tended to highlight the wild lifestyle of the outlaw biker culture, as desirable. But this film doesn’t glorify bikers. In fact, the military establishment, and their straight-arrow values, are the focus of heroism in this movie.

It’s true that by the time this film was made in 1971, outlaw bikers were no longer romanticized like they had been just a few years earlier, by the youth culture. Still, it’s hard to believe that during the Vietnam war era, when antiwar sentiments were strong, Hollywood goes and makes a film with the military as the good guys.