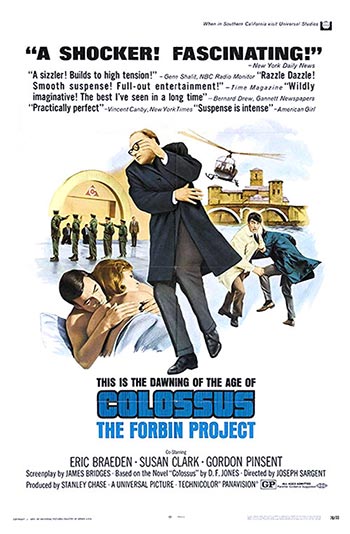 Forbin is the designer of an incredibly sophisticated computer that will run all of America’s nuclear defenses. Shortly after being turned on, it detects the existence of Guardian, the Soviet counterpart, previously unknown to US Planners. Both computers insist that they be linked, and after taking safeguards to preserve confidential material, each side agrees to allow it. As soon as the link is established the two become a new Super computer and threaten the world with the immediate launch of nuclear weapons if they are detached. Colossus begins to give it’s plans for the management of the world under it’s guidance. Forbin and the other scientists form a technological resistance to Colossus which must operate underground.

The Forbin Project is a well-done, thought provoking movie. It points out that man’s technology could just backfire on him someday. There has to be a limit to how much high-tech “stuff” we can come up with, without eventually getting in over our heads. Also makes one wonder if, maybe, there is a better way of doing things that we just don’t want to accept. Definitely not a movie for those who just want quick, loud action, but aimed more at thinking individuals. Sadly, it has kind of gone into obscurity, but an excellent movie nonetheless.