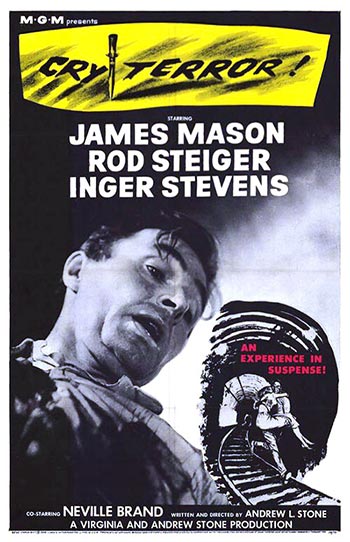 A wife, a daughter, a steady job. Yesterday Jim Molner was an ordinary guy. Today he’s a desperate man, frantically trying to save himself and his family, held hostage by a demented terrorist who’s demanding $500,000 not to detonate a bomb he’s planted on a domestic airliner. James Mason and Rod Steiger head an “A” cast in a jolting, psychology-driven thriller that, like The Desperate Hours, Suddenly and other 1950s films, turns home sweet home into the tense site of a family held hostage. Cry Terror! adds a sweaty layer of sexual tension as well, provided by Angie Dickinson as the terrorist’s sinuous moll and Neville Brand as his benny-addled henchman, salivating over Molner’s distraught wife (Inger Stevens).