Crypt of the Vampire (1964) Camillo Mastrocinque 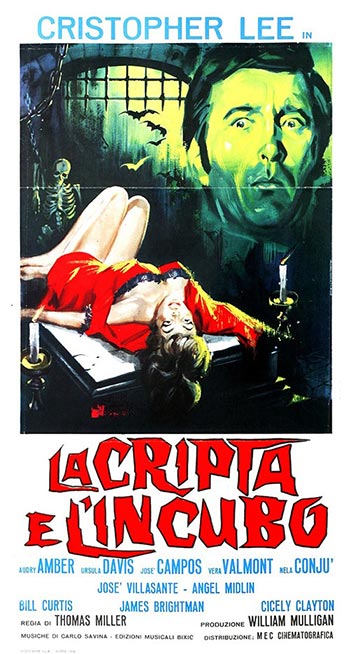 Count Karnstein sends for a doctor to help his sick daughter Laura. Her nurse believes she is possessed by the spirit of a dead ancestor;Carmilla. A young woman becomes intrigued by the mysterious deaths surrounding Laura after a carriage accident outside the castle forces her to stay. They become close friends until Laura becomes convinced the spirit of Carmilla is forcing her to kill.

This is a superbly old-fashioned and atmospheric chiller from the Italian Gothic horror revival of the 60s. The sets and costumes are stately, the camera-work slithery and shadowy (in good old b&w), and the lush score (featuring theremin and other creepy sounds) is a knockout. Since it is based on the Karnstein legend, there are plenty of exotic, full-figured Euro-starlets on hand to heave their breasts and scream, and the lesbian angle is fairly overt. Best of all, it’s played with utmost conviction, avoiding the campiness that often crept into these items (intentionally or not). Although there’s not enough sex or violence to appeal to modern genre fans, there are a couple of fine shocks and an inescapable atmosphere of doom and ferocity mingled with eroticism. A must-see for the discerning fan.