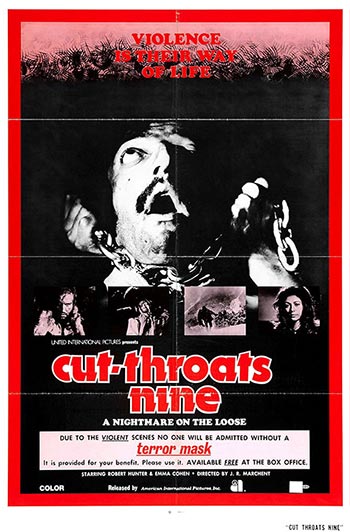 A wagon load of convicts on their way to prison is being escorted through the mountains by a cavalry troop. They are attacked by a bandit gang, and only a sergeant, his beautiful young daughter and an assortment of seven sadistic, murderous prisoners survive, and they are left without horses or a wagon. The sergeant must find a way to get his prisoners to their destination while protecting his daughter, watching out for the still pursuing bandits and trying to determine which one of the prisoners was the man who raped and murdered his wife.

Joaquín Romero Marchent’s “Condenados A Vivir” aka. “Cut-Throats Nine” is a raw and uncompromising film about survival, hate and violence, that has the reputation of being the most violent Eurowestern. And for good reasons – The most violent or not, it certainly is the goriest Eurowestern out there, and the movie is full of entirely despicable characters and a constant atmosphere of hate, greed and brutality.

“Cut-Throats Nine” is a gruesome Eurowestern that is, in some aspects, atypical for the Western genre. There is not too much gunplay, for example. Gore-fans will be pleased to hear that there is a lot of more explicit violence, such as cutting, burning and stabbing instead. The (well-deserved) reputation as the goriest Eurowestern is not the only reason to watch his film, that not only Spaghetti Western enthusiasts should enjoy. Any fan of brutal, uncompromising, pessimistic cinema should be pleased by this hero-less movie, in which almost every character is a real bastard. The bleak winter mountain setting reminds of Sergio Corbucci’s masterpiece “The Great Silence” of 1968, although the locations and photography are, of course, not nearly as impressive here.

“Condenados A Vivir” may not be everybody’s taste, but it is definitely a film experience that one is not likely to forget. Uncompromising, brutal and not for the fainthearted, “Cut-Throats Nine” is highly recommended to any fan of Eurowesterns and Gore-flicks!