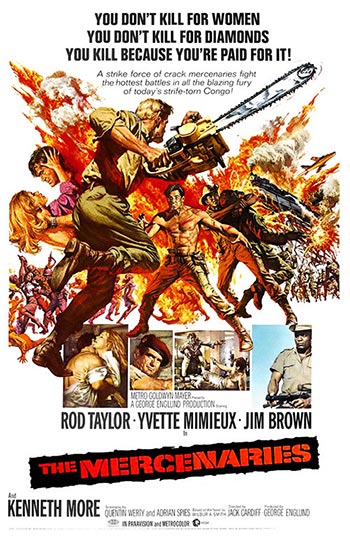 A band of mercenaries led by Captain Curry travel through the Congo across deadly terrain, battling rival armies, to rescue $25 million in uncut diamonds.

Take elite commandos, send them on a do-or-die assignment – and sit back and watch the action explode. The men-on-a-mission formula that worked in 1967’s The Dirty Dozen and in Where Eagles Dare (released in the U.S. in 1969) provides another salvo of volatile screen adventure with this strike-force saga released in 1968. Rod Taylor and Jim Brown are among a mercenary unit rolling on a steam train across the Congo, headed for the dual tasks of rescuing civilians imperiled by rebels and recovering a cache of diamonds. The film’s violence is fierce, unforgiving, ahead of its time. Quentin Tarantino would offer a tribute of sorts to this red-blooded wallop of a cult fave by using part of its compelling score in Inglourious Basterds.