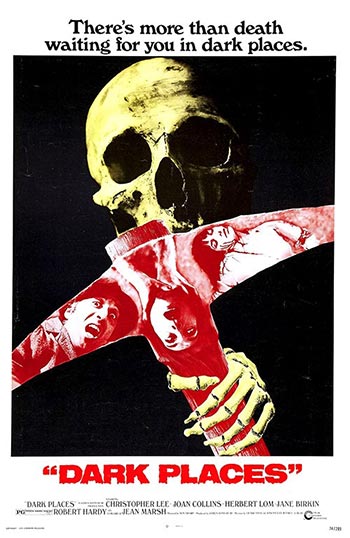 A scheming couple plot to conceal a hidden cache of stolen money from its rightful owner. The only problem is that the house they plan to hide it in is haunted.

The key thing about this film is the old house at the centre, and therefore the chilling atmosphere stemming from it. Director Don Sharp has a history in horror, with a handful of films made for Hammer, as well as the excellent cult trash classic ‘Psychomania’ to his name, so it’s quite unsurprising that this film has a horror atmosphere. The plot is well done also, with many different characters having a stake in the money at the centre of the story, and thus ensuring that the film remains interesting and varied.

Dark Places features a very good cast, which makes it even more surprising that this film isn’t better known. The great Christopher Lee is the biggest standout in his role as the doctor with an ulterior motive, while Joan Collins gives good support and provides some nice eye candy as his accomplice. The film also features performances from fellow British stars Robert Hardy and Herbert Lom, who also do well. Overall, this might not be a masterpiece; but it’s certainly a good film and comes recommended to fans of British horror!