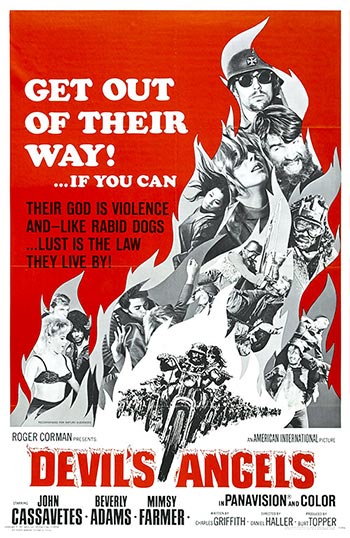 The Skulls, a violent biker gang led by Cody have a run in with a small-town sheriff after a member accidentally kills a citizen on the highway. He agrees to let them stay and protect the town. Cody then deserts them after a second gang’s rescue attempt leaves the town in shreds. With Beverly Adams as Lynn and Mimsy Farmer as Marianne.

Roger Corman’s Devil’s Angels which was made at the height of the movie-biker craze in 1967 has three qualities which make this “B” film a devilish good time.

Starring the late-great John Cassavetes as motorcycle gang leader Cody. Cassavates was one of the best actors of the 1960s, yet never really became popular with the mainstream movie goer. He brings a complexity to his character. Torn between “doing-your-own-thing” or “selling-out”. As his sidekick is the beautiful and lovely Beverly Adams. Ms. Adams is best known for playing Dean Martin’s sexy secretary in the Matt Helm series, Lovely Kravezit. Looking earthy, but sexy, she excels in one of his best on-screen roles.

A fine supporting cast is lead by Mimsy Farmer and veteran character actor/writer Leo Gordon. Out-dated today, but for the times it must rate as one of the top 5 biker films of the decade.