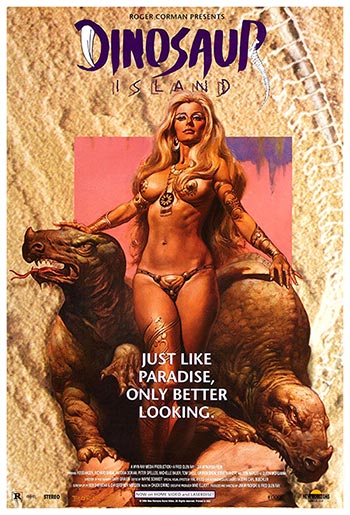 This movie is an ideal example of what viewers of straight-to-cable late night Skin-O-Max want to see….a wafer-thin plot, lots of boob action, and things exploding all over the place.

It starts with four stranded army soldiers washing up on a seemingly deserted island. Soon they are surrounded by a group of warrior women and hauled off to the main village. They are given the choice of fighting the big dinosaur (the name escapes me right now) or death. While the older soldier (Ross Hagen) thinks up a strategy, the other 3 go off, perusing the all-female village. They stumble upon 3 lovely villagers, and of course pair off with them. The ladies don’t have regular names so the guys invent some for them….right out of a men’s magazine. Miss April (Antonia Dorian), Miss May (Griffen Drew, who look simply fabulous in this movie), and Miss June (Michelle Bauer).

After that, the plot pretty much goes as expected: each soldier scores with their respective woman, kill the dinosaur, and have some more sex later. Even Ross Hagen’s character gets some from the queen of the village! What an ending! It’s a short, 80-something minute film which will leave you in stitches with how bad it really is. Truly a treat for those who watch Cinemax Late Night (commonly called Skin-O-Max).