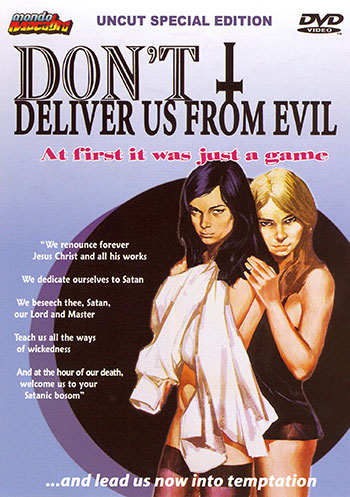 Anne and Lore, neighbors and best friends, barely into their teens, board at a convent school where they have taken a vow to sin and to serve Satan…

“Don’t Deliver Us From Evil” tells the simple story of two teenage convent girls who dedicate ourselves to Satan. Gorgeous raven-haired Anne and her best friend Lore are fascinated by evil. After renouncing Jesus Christ they start to seduce men, kill the groundskeeper’s bird and perform various acts of blasphemy. The film is pretty controversial as the both actresses look very young. It’s disturbing to watch a child-like girl getting her clothes torn off. There’s a lot of sacrilegious imagery and it seems that the director clearly hates Catholic Church, but the violence is kept to minimum. The sleaze is quite plentiful, though. The film is inspired by the original ‘Heavenly Creatures’ Pauline Parker and Juliet Hammond, the two girls whose close friendship resulted in murder. It studies the themes of female friendship and teenagers alienation and questions faith and rules.