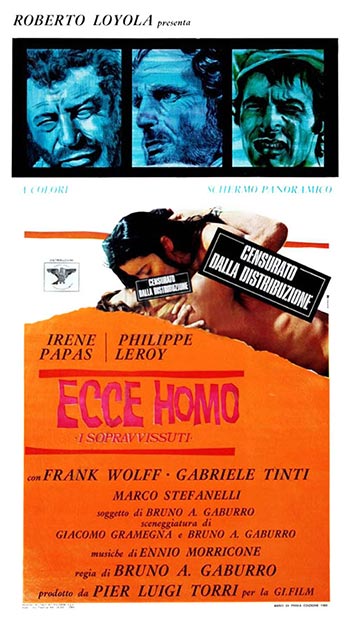 Having survived a terrible nuclear war that destroyed the human race, a family of three persons – Jean, his wife Anna and son Patrick, live in a trailer by the sea.

“Ecce Homo” (Behold Man) aka “The Survivors” is a thought provoking, downbeat well acted tale of the last survivors of a nuclear holocaust.

At first it seems that only one family of three, the husband (LeRoy) slowly dying of radiation sickness, his earthy wife (Papas) and pubescent son are the only survivors on a small coastal pocket of the Mediterranean. But soon two men find them and join them…they are the only ones left that escaped the widespread contamination of fallout. That is when the trouble starts…the younger and more virile of the two men (Tinti) easily makes friends with the wife and son and has no intention of taking orders from the jealous, dictatorial and moralistic husband. The neglected unsatisfied wife is soon driven to open rebellion against him, his constant negativity and selfish demands drive her into the arms of the handsome lusty man who treats her as the desirable partner she needs to be….tempers and hatreds soon grow to alarming degrees that jeopardize their very existence.

The passions and drama draw the viewer in and you will watch spellbound as the final denouement unfolds. This is one of the few intelligent treatments of the post-apocalyptic theme, more stirring and elemental than “On the Beach”.