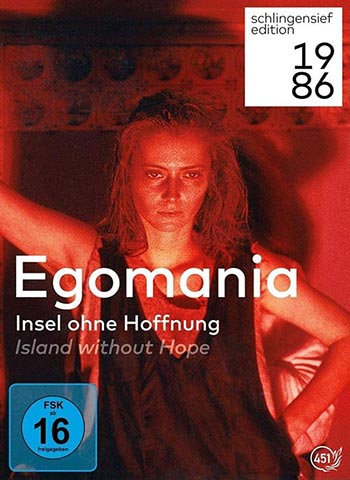 There’s not going to be a different end of the world: relentless fights full of hate and love for incest and wealth. Udo Kier as the devil’s aunt and Tilda Swinton as Brünhilde. A young couple trapped in eternal ice, bound to each other in tender love, threatened by everyone. A desolate island in the baltic sea is governed by the creepy vampire-like baron Aunt Devil. Where peace and love shaped the lives of the islanders, now hopelessness and discord rule. When suddenly a true love threatens the tristesse of his island, the baron cracks up …

Egomania is a visually stunning end-of-the-world melodrama about lust, jealousy and murder set amidst solar eclipses, orchestral chants and the distant thunder of the boiling sea. The film’s characters – riddled with unconscious desires – find themselves imprisoned on an island. Drawing parallels to the work of British filmmaker Derek Jarman and staring Jarman’s actress-muse Tilda Swinton, Schlingensief’s raw and almost mythological film stands in contrast to his more offensive efforts.