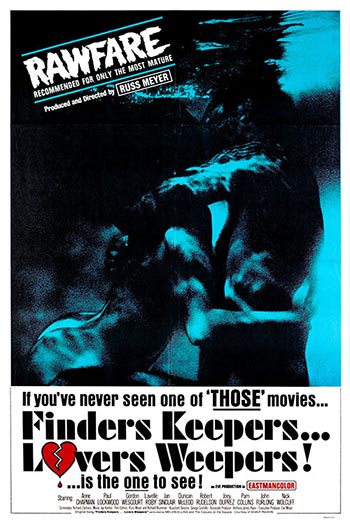 Paul, the owner of a topless go-go bar on the Sunset Strip, isn’t having a good day. His girlfriend, unbeknownst to him, is planning to rob his club, and his wife is having an affair with the hunky bartender.

This film tends to touch base on issues in several other of his films. In “Vixen,” the issue was marital bliss and touched on the concept of partner swapping. A similar notion is touched on in “Finders Keepers” in marital fidelity, and promoting the concept that “no one goes unpunished.” Whether Meyer could be perceived as a fidelity or conservative living advocate, who knows. After all, the man was known for being critical of anti-Vietnam protesters (Meyer had proudly served as a wars footage cameraman in WWII). But it contains the nudity and light humor of his other flicks. It’s not one of his more known films, but is worth checking out even if only once. The movie actually has a good plot to it, with senses of drama and a sense of urgency that keeps the pace going from start to finish.