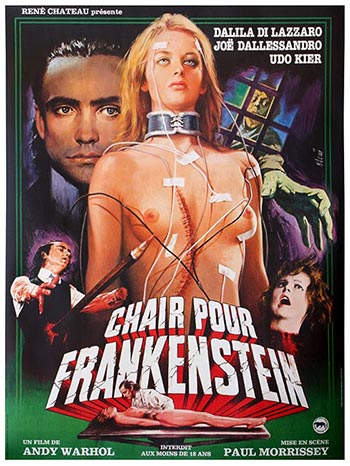 In Serbia, Baron Frankenstein lives with the Baroness and their two children. He dreams of a super-race, returning Serbia to its grand connections to ancient Greece. In his laboratory, assisted by Otto, he builds a desirable female body, but needs a male who will be superbody and superlover. He thinks he has found just the right brain to go with a body he’s built, but he’s made an error, taking the head of a gay aesthete. Meanwhile, the Baroness has her lusts, and she fastens on Nicholas, a friend of the dead lad. Can the Baron pull off his grand plan? He brings the two zombies together to mate. Meanwhile, Nicholas tries to free his dead friend. What about the Baron’s children?

“Flesh For Frankenstein” of 1973 is a wonderfully grotesque, bloody, bizarre, creepy, hilarious, artistic and absolutely brilliant slice of European Exploitation Horror that may not be missed by any lover of cult-cinema. The first of two takes on classic Horror tales directed by Paul Morrissey, starring Udo Kier and Joe Dallessandro and (co-)produced by iconic artist Andy Warhol (the other being “Blood For Dracula), “Flesh For Frankenstein” (which is sometimes referred to as “Andy Warhol’s Frankenstein”) is an Italian/French/American co-production that simply has to be seen to be believed.

A blend of rich Gothic atmosphere, grotesque artsy imagery, unvarnished sleaze and excessive gore and wonderfully black humor, “Flesh For Frankenstein” is both a tribute to- and satire of earlier Horror greats. At the time of its release, the film was highly controversial for its depiction of sex and gore and even received an X-Rating in the US: No wonder, as this unspeakably morbid little gem features all kinds of demented scenes including explicit perversions, such as necrophilia, all containing a very VERY morbid sense of humor.