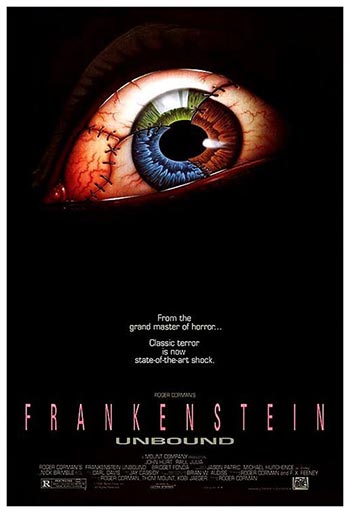 The ultimate weapon which was meant to be safe for the mankind produces global side effects including time slides and disappearances. The scientist behind the project and his car are zapped from the year 2031 to 1817’s Switzerland where he finds Dr Victor Frankenstein and his contemporaries.

Frankenstein Unbound is one of those movies that is almost impossible to categorize. Part horror, part science fiction, part fantasy, and part comedy. And what is even more interesting is the cast of all stars. Roger Corman is able to put all of these together to form a truly mesmerizing film that you will never forget.

For a Roger Corman film this is really well done. John Hurt and Raul Julia really compliment each other in this movie. It is too bad that Bridget Fonda and Jason Patric didn’t have bigger roles in the movie as their characters are fascinating as well.