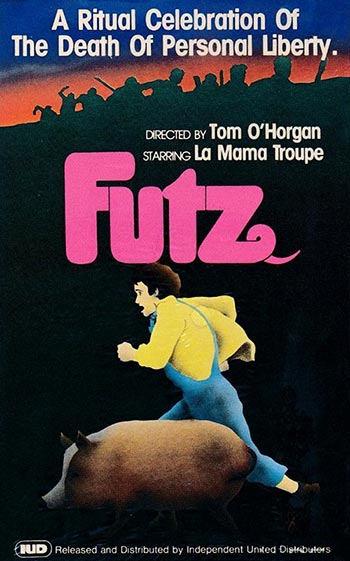 Sexual satire about a young farmer who has had many bad experiences with women. He showers love and affection upon his pet pig, Amanda, saying she alone is worthy to be his wife. His “marriage” to Amanda causes a scandal in the community, almost mass hysteria.

FUTZ is the only show preserved from the experimental theatre movement in New York in the 1960s (the origins of Off Off Broadway). Though it’s not for everyone, it is a genuinely brilliant, darkly funny, even more often deeply disturbing tale about love, sex, personal liberty, and revenge, a serious morality tale even more relevant now in a time when Congress wants to outlaw gay marriage by trashing our Constitution. The story is not about being gay, though — it’s about love and sex that don’t conform to social norms and therefore must be removed through violence and hate. On the surface, it tells the story of a man who falls in love with a pig, but like any great fable, it’s not really about animals, it’s about something bigger — stifling conformity in America.

The stage version won international acclaim in its original production, it toured the U.S. and Europe, and with others of its kind, influenced almost all theatre that came after it. Luckily, we have preserved here the show pretty much as it was originally conceived, with the original cast and original director, Tom O’Horgan (who also directed HAIR and Jesus Christ Superstar on Broadway).

This is not a mainstream, easy-to-take, studio film — this is an aggressive, unsettling, glorious, deeply emotional, wildly imaginative piece of storytelling that you’ll never forget. And it just might change the way you see the world…