God Does Not Pay on Saturday (1967) Tanio Boccia 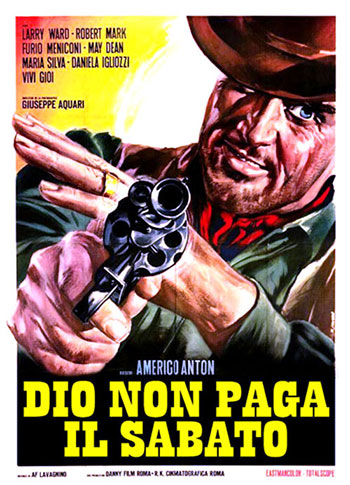 After a bloody stagecoach robbery, a nasty gang of cutthroats leave a wounded compatriot to die on the plains while they go hide out in a ghost-town and begin making hostages out of whoever comes along.

Kill the Wickeds is a moody Euro western starring Larry Ward, who western fans might recognize from the great, unheralded TV series The Dakotas. Also featured are Robert Mark (aka Rod Dana of Operation White Shark) and Daniela Igliozzi as a sexy outlawette.

Spaghetti western fans won’t be disappointed by the high body count. We’re also treated to a catfight, and later, the novelty of a showdown between two women folk.

Superficially, Kill the Wickeds looks and sounds like a standard spaghetti factory incarnation of an American “B” western. The theme music is imitation Frankie Laine with a thick Italian accent. The slick, quick-on-the-draw gunslingers, and the taciturn retired-gunman hero are right out of Hollywood mythology. Mix these standard archetypes with elements of Italian Giallo however, particularly the creepy soundtrack underscore, and the result is a very unusual and entertaining Western.