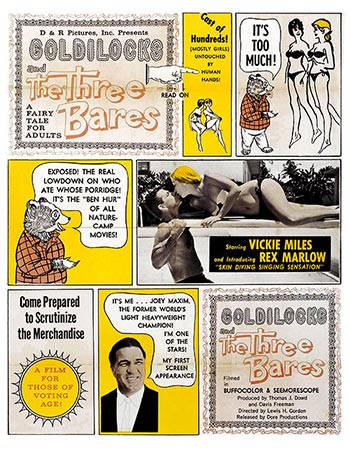 Nightclub singer Eddie and comedian Tommy, working in a roaring twenties style club, meet and being dating publicist Allison and photographer Cynthia, respectively. They soon discover that the women spend weekends at a nudist club which the guys disaprove.

Legendary Herschell Gordon Lewis, future “godfather of gore”, invites us to a nudist colony. “Goldilocks & the three bares” is a mixture of comedy and musical, in which the whole plot is just a pretext for showing a viewer a gallery of naked bodies.

Goldilocks and the Three Bares (1963)