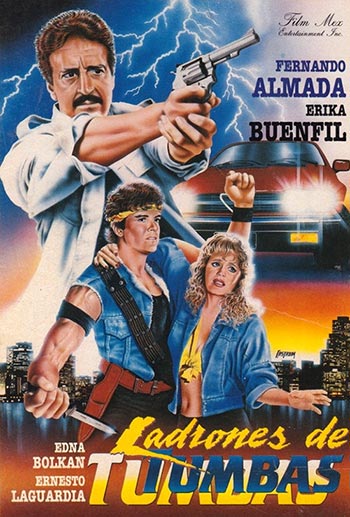 Ruben Galindo’s “Grave Robbers” tells the tale of an undead axe-wielding Satanist brought back by young grave robbers. An undead satanic priest is released from his chains of death. And he is thirsty for blood! The gore flows freely as hatchet wielding zombie butchers his victims. Atmospheric and pulpy Mexican shocker with plenty of blood and several very gory death scenes. The hooded monk is a pretty creepy killer who truly enjoys spilling blood for example a face is shoved into a metal railing and a hand is bursting through a terrified grave robber’s stomach. “Grave Robbers” is a highly entertaining and fast-paced slasher flick with cob-webs, old abandoned houses and spooky graves.