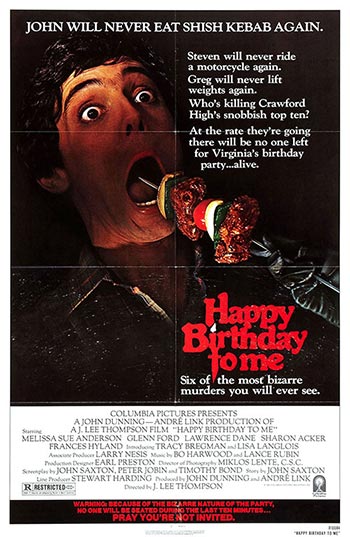 Audio 2: Commentary with Justin Kerswell and
the guys from The Hysteria Continues podcast

Virginia is proud that she belongs to a clique. The best students at a private school. But before her 18th birthday, a grueling set of murders take place and her friends are the ones who are falling prey. Could it be her? She suffers from blackouts due to a freak accident one year earlier. We soon learn the truth behind her accident and what is going on…

Happy Birthday to Me stands head and shoulders above the average slasher film on a number of levels. What starts out as the standard slasher fare builds into to a surprisingly twisted thriller with strong tension! The conclusion of the film may just be one of the most “off-the-wall” endings in horror history! It’s an effectively mind-blowing ending to one warped murder mystery. Also worth mentioning are the truly inventive murders in this movie. The gory killings are oddly clever, even to the point of being darkly humorous, yet really shocking. The cast is pretty solid. Beautiful Melissa Sue Anderson makes for a fetching and sympathetic lead. Her co-stars deliver some believable performances. Director Thompson gives this film a wonderfully dark and atmospheric feel.

Not many slasher films live up to this amusing and off-beat bloody entry.