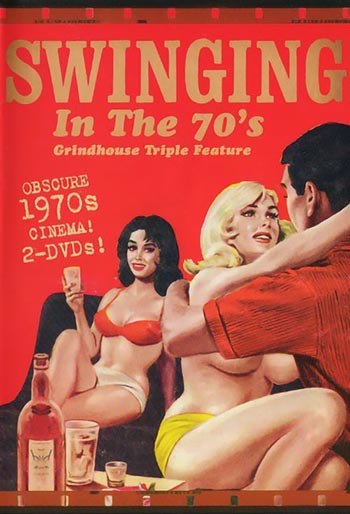 Harvey Swings – sort of – when Harvey The Klutz and his no-nonsense lady Sheila – plain but sultry – visit the home of Reggie (Jeff Roberts of Bulls Market and Weekend Convention) and Marie, an effete-snob couple dedicated to swinging.(Or, in this case, “schwinging”.”) After some pompous dialogue from dressing-gowned airbag Reggie, the two couples are given a nauseating cootchie dance by the swish butler – who makes Liberace look like G. Gordon Liddy – altought the bultler’s gender bending doesn’t prevent him from later accepting some head in the pantry by the skinny blonde maid.

Reggie takes Sheila into a bedroom for a surprisingly erotic session -at least for this kind of skanky production – while Marie is driven so nuts by Harvey’s idiocy and lack of amorous interest that she tries to cut her wrists with an electric shaver! The maid quickly calms down Marie with a bathtub romp while Reggie – who must live on a diet of vitamin E and lecithin – gives Sheila more pleasure by the pool. Marie and the maid try to get Harvey into a threeway, but it’s hopeless. He mounts Marie and is finished in exactly two seconds. A freakshow.