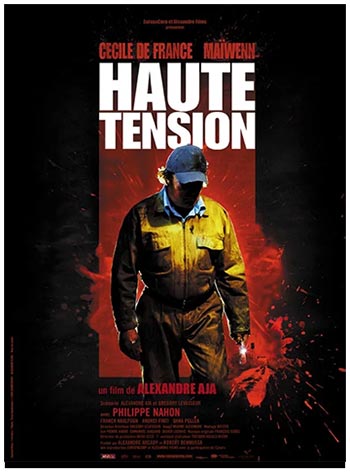 Alexia travels with her friend Marie to spend a couple of days with her family in their farm in the country. They arrive late and they are welcomed by Alexia’s father. Late in the night, a sadistic and sick killer breaks into the farmhouse, slaughters Alexia’s family–including their dog–and kidnaps Alexia. Marie hides from the criminal and tries to help the hysterical and frightened Alexia, chase the maniac, and disclose his identity in the end.

There should not be any surprise why Wes Craven chose Alexandre Aja to direct the remake of “The Hills Have Eyes”. Aja’s “High Tension” delivers what could be the most terrifying scenario in horror history since “The Last House on The Left”. Two young women travel to a dreary looking farmhouse to study for important school exams. That same night, as soon as the doorbell rings, the madness strikes, and it strikes hard. The killer in this film holds nothing back, and it will feel as if you had been struck in the stomach by a 2×4. The flick will not let you go until the last fearful scene is over. Highly recommended.