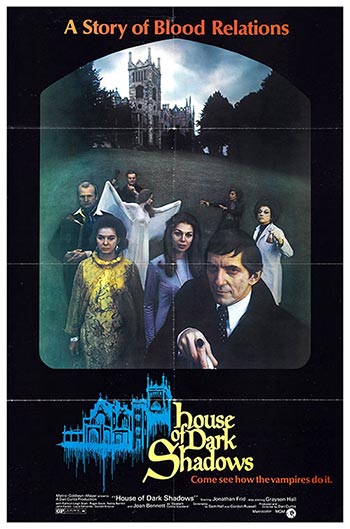 House Of Dark Shadows, based on the very popular TV Gothic soap opera, follows the life (or is that AFTERlife) of Barnabas Collins. Recently unleashed from his coffin by local drunk, Willie Loomis, the vampire (Barnabas) goes on a killing spree, while at the same time charming his present day family members. In the process he meets local girl Maggie Evans and notices that she looks exactly like his deceased fiance Josette. Barnabas assumes that she is the reincarnation of Josette, and plans to make him his unholy bride for eternity.

Intelligently done, but bloody and violent story based on the hit TV show Dark Shadows from the late 60s. The plot revolves around vampire Barnabas Collins, who finds a cure to become human again so he can wed a beautiful girl. Genuinely creepy atmosphere, beautifully filmed and surprisingly first-rate acting by cast.