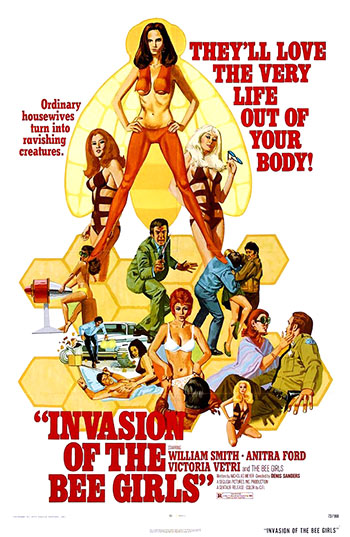 In the small town of Peckham, California, many men die for excessive effort during sexual intercourse. When a scientist from the Brandt research laboratory is found dead in a motel, the government sends Agent Neil Agar (William Smith) to investigate the mysterious deaths. He suspects that the deaths may be related to some experiments of Dr. Susan Harris (Anitra Ford), who is researching bees in the Brandt facility.

“Invasion of the Bee Girls” is a delightful and enjoyable B-movie. The dark cinematography is awful with very bad lighting and horrible direction; the flawed screenplay and dialogs are silly and very funny; most of the actors and actresses are ham, with terrible acting and ridiculous dialogs; there are many beautiful naked women, free nudity with lots of breasts and hilarious scenes, like, for example, the unique shot of the hero along the whole story is in a lever of a computer that provokes fire and lethal smoke everywhere in the room where the bee girls are gathered together. The actresses undress practically in every scene, without any motive, being a film of soft sexploitation. If you like trash-movies and beautiful nude women, see this flick.