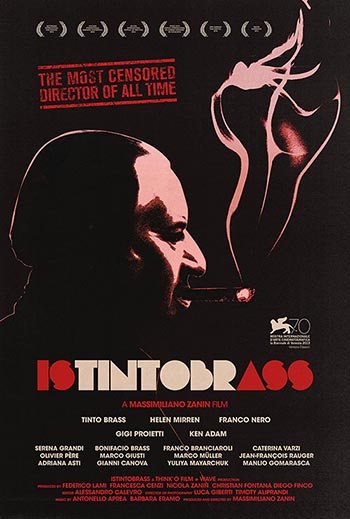 This documentary narrates the formation years of Tinto Brass in Paris at the Cinématèque Française next to Roberto Rossellini and Joris Ivens, discussing Cinema with other young filmmakers with renowned names such as Bresson, Godard. His return to Italy and his first masterpieces like “Chi lavora è perduto”, “L’urlo”, “Nerosubianco”, expression of an anarchic, innovative, experimental cinema full of linguistic innovations.

An almost forgotten cinematography that the documentary will bring to light thanks to the analysis of Marco Müller, Gianni Canova, to then reach the films on power like Salon Kitty and Caligula which decreed an enormous success with the public. Until reaching today, Brass as a media character and his iconography of erotic pleasure and voyeurism, in the tales of Gigi Proietti, of the Academy Award Winning Helen Mirren, Franco Nero and the two time Academy Award winner Sir Ken Adam. This film wants to tell of a nonconformist man, who “loves Love” in a world that adores violence, his enduring every censorship, always and foremost delivering a cinema whose superiority was form over content, signifier over significance. “The ass is the mirror of the soul” is not a simple boutade, but the poetic synthesis of a precise ethical, aesthetic and philosophical project, which sees the joy in living, in the affirmation of Eros over Thanatos the only free path for the individual.