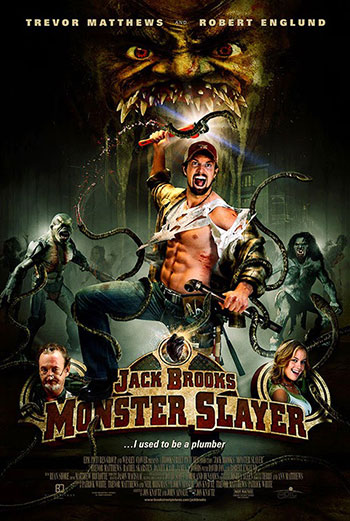 As a child Jack Brooks witnessed the brutal murder of his family. Now a young man he struggles with a pestering girlfriend, therapy sessions that resolve nothing, and night classes that barely hold his interest. After unleashing an ancient curse, Jack’s Professor undergoes a transformation into something not-quite- human, and Jack is forced to confront some old demons… along with a few new ones.

A delirious performance by horror vet Robert (Nightmare on Elm Street) Englund and the filmmakers’ predilection for old-school monster suits over CGI help to make the Canadian indie horror-comedy Jack Brooks: Monster Slayer an enjoyable and entertaining alternative to the current rash of relentlessly grim fright fare. As played by co-producer Trevor Mathews, Jack Brooks is no barrel-chested pulp hero, but rather an aimless small-town slacker with a hair-trigger temper (the result of childhood trauma involving his family’s death at the hands of a monster). Plagued on all sides by a nagging girlfriend, a hapless shrink and a dead-end job as a plumber, Jack seems destined for mediocrity–until his night school professor (an terrific, unfettered comic turn by Englund) unearths an ancient evil and begins to change into a ravenous, slobbering creature, thus giving Jack both a purpose and an outlet for his anger issues.

Director Jon Knautz’s feature debut pays loving homage to all manner of boyish pop-culture touchstones, from Marvel Comics and Ray Harryhausen epics to the early works of fellow do-it-yourselfers like Sam Raimi, and if his set up feels belabored in its telling, he delivers the goods once Jack straps on his plumbing toolkit to square off against the monster-fied Englund. Inventive and frequently laugh-out-loud funny.