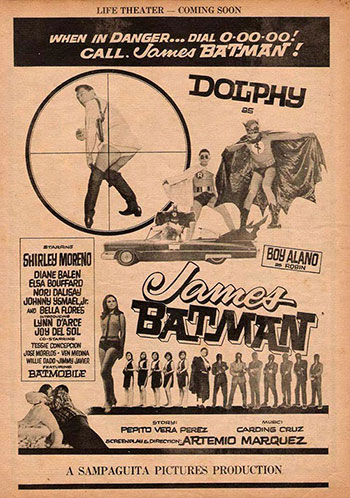 An evil syndicate is set to conquer the world, and the mission is to stop them from fulfilling their viscious plans. The consequences of their failure may mean the destruction of all dissenting countries who stand in their way. All countries must bow to their power before the deadline of five days expires. The solution is sending in their best operatives; James Hika, and the dynamic duo of Batman and Robin. They are first detested with working with each other, but for the safety of the world, they join forces. Through thick and thin, they survive the syndicate’s plan to dispose of them. They get closer to stopping the syndicate plan, but there is a traitor in their midst. Will this deter them from achieving their goal?

What makes James Batman such a strange animal — aside from the obvious — is that, in parodying the James Bond films of the mid sixties and the Adam West Batman television series, it’s spoofing two things that are already spoofs themselves. On top of that, the film, in addition to delivering lots of very broad slapstick comedy, also strives to function as a proper action film, and as such features quite a lot of fairly soberly staged fight sequences and action set pieces. In fact, by the time we reach the final act, most of the comic antics have been dispensed with, and James Batman plays out its remaining length as a fairly straightforward action melodrama. The result is that the movie gets to have it both ways by presenting Batman and James Bond, as the objects of parody, as cowardly and preening, while still having them go on to perform the daring heroic feats that the audience expected of them.