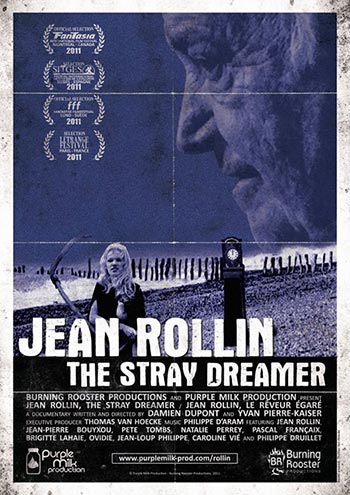 Who is Jean Rollin?

A man who has spent his childhood in the middle of some of the greatest intellectuals of the twentieth century. An artist who has worked with Maguerite Duras for his first film. A director’s career singular and unique in French cinema, with films overtly fantastic, surreal, poetic – disconcerting. A filmmaker who has always been murdered by the critics but starting, finally, to enjoy some recognition in France, while many fans worship him already in Europe and the United States. Jean Rollin signs a marginal and unknown work marked by death and nostalgia, and whose main obsession is the time, that of the wandering and dreams.

Jean Rollin died in December 2010 at the age of 72. This documentary is the portrait of a real artist, the last surrealist, a poet who created his very own dreamworld. A tribute for a unique director, with testimonials from his closest collaborators.