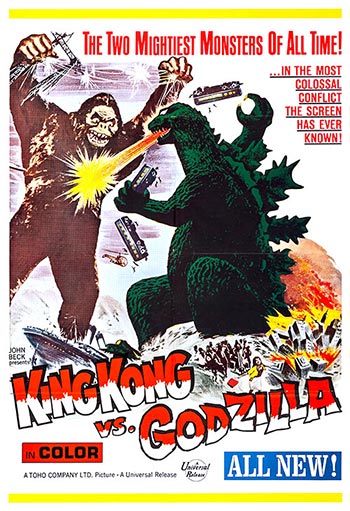 A pharmaceutical company captures King Kong and brings him to Japan, where he escapes from captivity and battles a recently released Godzilla.

Director Ishiro Honda, who first brought The Big G to the screen in the brilliant 1954 film GOJIRA (re-edited in the US as Godzilla King of the Monsters) decided to scrap the heavy messages and themes of the original film when he made King Kong vs. Godzilla, however he does appeared to have had a great deal of fun making this goofy rubber monster classic.

Godzilla breaks out of an iceberg he was imprisoned in and heads to knock down Tokyo. Meanwhile, a pharmaceutical company discovers King Kong on an island full of Japanese actors in blackface playing the natives (!) and the flamboyant CEO decides to bring Kong to Japan as a publicity stunt. The government decides to pit the two titans against each other on the top of Mount Fuji in the climatic scene of the movie.

Much of this film is film is intentionally goofy, particularly the island scenes. The screenwriters decided that electricity makes King Kong stronger, but it weakens Godzilla (to make sure it would be a fair fight). Honda also put in several homages (parodies) to the original 1933 King Kong. The final battle on Mount Fuji is similar to watching WWF wrestling, except better, because they’re wearing monster suits. If you want a film with epic romance and sweeping drama, you should watch Gone With the Wind, but if you’re in the mood for campy monsteriffic fun like only the Japanese can do, watch this.