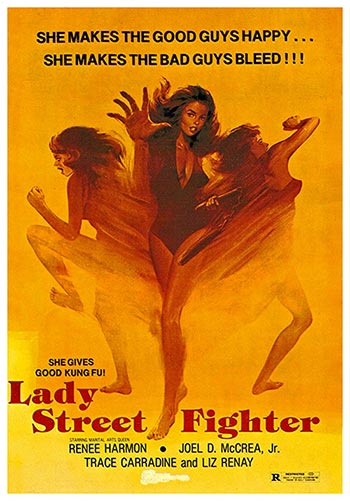 Cunning and deadly foreign beauty Linda Allen (a hilariously atrocious performance by Rene Harmon, who sports an adorable heavy German accent) arrives in Los Angeles to track down the evil mobsters who tortured and murdered her sister. Meanwhile, the mobsters try to find a tape with incriminating information on it. Plus Linda has to deal with both a nasty pimp and a crooked FBI agent who intends on killing her.

Boy, does this deliciously dreadful doozy possess all the right wrong stuff to qualify as a real four star stinkeroonie: exceptionally inept (mis)direction by James Bryan (the same cinematic genius who blessed us with the similarly shoddy “Don’t Go in the Woods” and “The Executioner, Part II”), uniformly terrible acting from a lame no-name cast, clumsily staged action scenes (the car chases, shoot outs, and especially the rough’n’tumble martial arts fights are all uproariously awful), a hopelessly muddled and meandering narrative, a simply astounding kinky swinging sex party (Rene suggestively sucks on celery stalks with a certain remarkably sensuous aplomb), poorly recorded post-sync dialogue, and a handy helping of gratuitous female nudity that’s largely provided by dumpy and unattractive ladies with a few too many miles (and pounds) on them.

The legendary Liz Renay, looking aged, pasty and chubby, pops up in all her sexy and uninhibited fortysomethingish splendor as a stripper who bumps and grinds for all its worth in a seedy nightclub. Max Reed’s shaky’n’scratchy cinematography gives this tacky flick an appropriately ratty look. An absolute cruddy hoot.