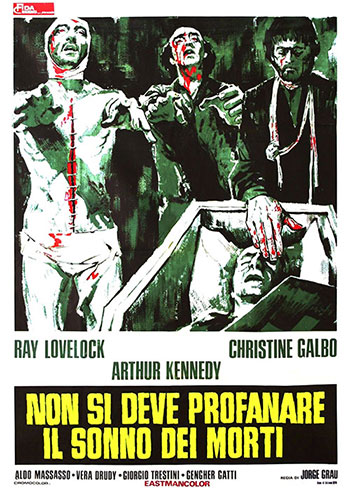 A cop chases two young people visiting the English countryside, suspecting them of a local murder; unbeknownst to him, the real culprits are the living dead, brought to life with a thirst for human flesh by radiation being used by area farmers as a pesticide alternative.

‘The Living Dead At Manchester Morgue’ is possibly the most underrated zombie movie ever made. It’s certainly one of the most interesting as it’s an Italian/Spanish co-production, but curiously set in England, and it predates both ‘Dawn Of The Dead’ and the subsequent Eurozombie boom led by Lucio Fulci et al. The zombies themselves aren’t as gruesome and repulsive as Romero or Fulci zombies, but once you get over that you’ve got yourself one very watchable and entertaining take on the genre. The two leads (Cristina Galbo and ‘Autopsy’s Ray Lovelock) are both good. They meet while travelling due to a minor accident, become uneasy travelling companions, and subsequently find themselves caught in a nightmare of non-stop zombie action while being pursued by a ruthless cop (Arthur Kennedy – ‘Fantastic Voyage’) who believes they are Manson-like hippie serial killers. An unfairly neglected movie that deserves a larger audience.